Mercedes-AMG expanded its product lineup with the introduction of the EQE models in 2022 and offered it either as the 43 4Matic or the 53 4Matic+.

Both of them were built on the same electric-architecture EVA2 developed by Mercedes-Benz as a solution for its emission-free vehicles. The EQE came in a smaller package than its bigger brother, the EQS, but with enough performance to lure customers away from ICE-powered vehicles. But it couldn't do that only with silent motors and some fancy screens inside the cockpit; it had to deliver more than that.

For starters, the exterior showed the aggressive AMG styling for the front bumper, with the A-shaped lower grille placed into the apron. It was flanked by a pair of air scoops in front of the wheels, needed to cool the brakes. The main grille, between the headlights, was actually a panel with vertical chromed lines that mimicked the panamericana grille. Yet, since it was an electric vehicle, it didn't need that much cooling area. From its sides, the EQE revealed its fastback shape, with a sloped rear window and a lip-spoiler on the liftgate. Its standard 20" light-alloy wheels, with an option for a 21" set, completed the image of a sports car, even though it had five doors (including the tailgate).

Inside, the carmaker installed a pair of sports bucket seats at the front, with integrated headrests, and divided by a tall center console used as a storage area and for the multimedia controller pad. Like on the EQS, the EQE featured a three-screen dashboard. A large TFT display was in the instrument cluster, while the center stack hosted a touchscreen unit. The third was mounted in front of the right passenger. At the back, Mercedes-AMG installed a bench for three, with enough legroom and no center tunnel since there was no driveshaft to cross the vehicle.

For the drivetrain, Mercedes-AMG installed a 90.6 kWh battery pack that provided the energy for the motors installed on both axles. 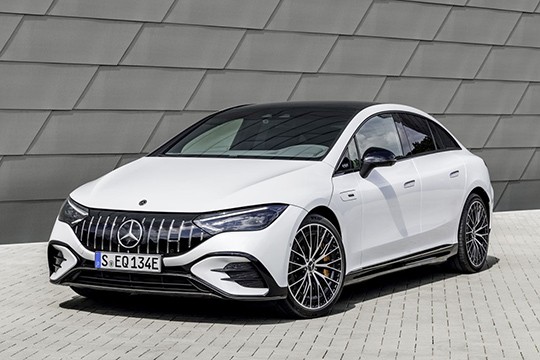