Mercedes-AMG introduced the convertible version of the AMG E53 Coupe in 2018 but, to comply with the Euro 6d regulations, it had to be refreshed.

The AMG brand started as an independent tuner, specialized for Mercedes-Benz vehicles. Over time, the German carmaker acquired the small independent company from Afallterbach and transformed it into an in-house manufacturer as a different brand. The E53 AMG was based on the Mercedes-Benz E-Class Coupe. But it was more than just a re-badged car.

AMG dramatically restyled the E53 AMG coupe with new, sharp-cut, full-LED headlamps. The powerdomes on the hood amplified the powerful impression. The front apron's center section was drawn into an A shape and created a larger air intake for the five vertical struts grille. The outer air-scoops featured two transverse slats that were extended to the splitter. In the back, twin oval tailpipes were installed. The soft-top system was kept, even though a hard-top version might have been a better option.

For the interior, the AMG E53 offered a luxurious yet sporty atmosphere. The two displays on the instrument cluster and the multimedia system blended under the Widescreen Cockpit's joint glass cover. The driver could choose between three AMG display styles: "Modern Classic," "Sport," and "Supersport."

The engine was a twin-turbo, inline-six engine. An air-compressor helped the turbochargers to get to their boost level faster. Also, there was additional help from the EQ Boost starter-generator. Thanks to the 48v electric system, the car had enough juice in the batteries to give the vehicle an extra 16kW (21 hp) and 250 Nm (184.3 lb-ft) of torque when needed. And at any kick down, thanks to the Speedshift TCT 9G transmission, the engine revs up fast. 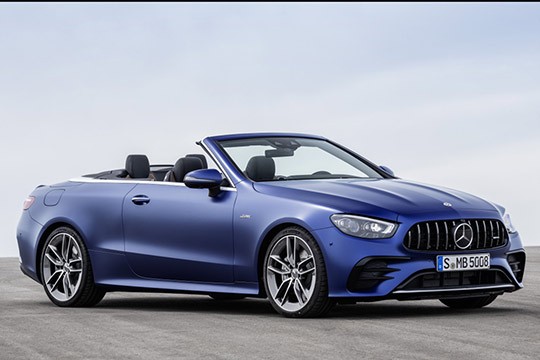