While some people still enjoyed their coupes, sedans, and hatchbacks, others needed station wagons for their families but still wanted to have fun at the wheel.

For them, Mercedes-AMG made the C43 4Matic T-Model.

Not all station wagons are born equal, and the C43 T-Model is proof of that. With its over 400 horses under the hood, technology carried over from Formula 1, and a trunk big enough for a couple of strollers, it could offer pleasure for the driver and enough luggage space for a family of four.

The C43 was developed on the same platform as the rest of the C-Class W206, but after a healthy cure at the AMG's beauty saloon, it came out with a different front fascia. It offered a Panamericana grille and an aggressive-looking apron that sported air-intakes on the sides and an additional grille in between to cool the engine and other accessories. Moreover, the carmaker adorned the front fenders with a set of Turbo-electrified badges, boasting their visual upgrades. At the back, the T-Model (station wagon) featured an electric-operated tailgate adorned with a spoiler. Under the rear bumper, the four exhausts set was a promise for performance.

Inside, like its sedan sibling, the C43 T-Model featured a pair of bucket seats at the front and a cabin wrapped in ARTICO man-made leather. It also boasted the same dual-screen dashboard, one in front of the driver as an instrument panel and a second touchscreen unit atop the center stack for the MBUX infotainment system. The main difference was in the back, where the split-folding bench extended the trunk area from 490 liters (17.3 cu-ft) up to 1,510 liters (53.3 cu-ft).

Under the hood, the 2.0-liter powerplant carried over from the A-class but mounted longitudinally offered 408 PS (402 hp). Its electric turbocharger technology was developed for Formula 1 cars but made its way onto production vehicles as well. The oomph was sent in all corners via a nine-speed automatic transmission. 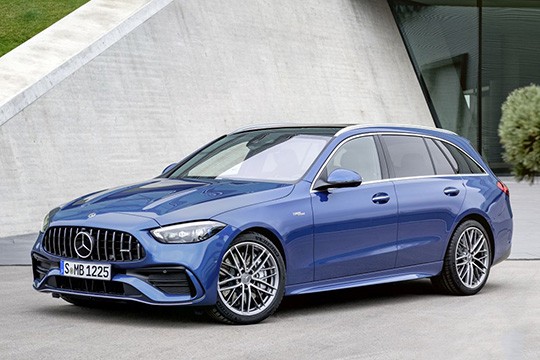