Mercedes-AMG took the excellent 2.0-liter turbocharged powerplant developed for the A-Class, rotated it by 90 degrees, and installed it into the engine bay of the C-Class, thus resulting in a performance-oriented compact sedan: the C 43.

When the downsizing trend started, AMG was caught off-guard. In those times, it was focused on big powerplants with up to 7.3-liter displacement. But its engineers went back to the drawing board and made one of the best inline-four engines in the world: a 2.0-liter inline-four, which they planted into the A-Class hatchback and turned into a successful story. In 2022, they tried the same with the C-Class.

Unlike its non-AMG sibling from Mercedes-Benz, the C43 sported a much-more aggressive front fascia, with the Panamericana grille and the AMG-specific lower front apron, where the A-shaped lower grille flanked by a pair of air-intakes enhanced both the look and the car's aerodynamic. Furthermore, on the front fenders, the Turbo-electrified badges were an accurate statement of the technology comprised in the vehicle.

Inside, the sport bucket seats at the front covered in ARTICO man-made leather offered high bolstered areas that kept their occupants in place during high-speed cornering. Like its regular, non-AMG sibling, the C43 showed a two-screen dashboard, with one in front of the driver as an instrument panel and a touchscreen atop the center stack for the MBUX infotainment system. The three-spoke steering wheel with the flat-bottom area was thick and covered with Alcantara for better grip.

Under the hood, AMG installed the longitudinal version of the four-cylinder 2.0-liter powerplant developed for the A-Class. It was helped by an electric turbocharger, a technology developed for Formula 1. Power went in all corners via a nine-speed automatic gearbox. 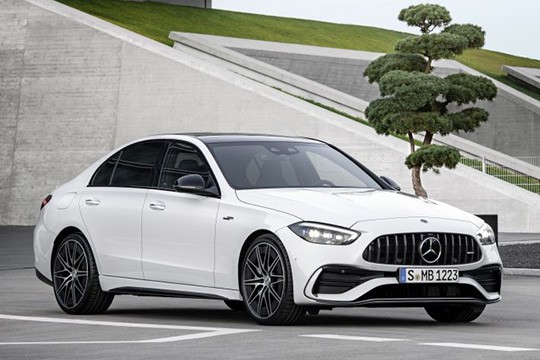