Mercedes-AMG unveiled in January 2023 a facelift for its CLA range, in both sedan and long-roof shape, where the latter version was named Shooting Brake.

Four years after the introduction of the Shooting Brake version for the second generation of the CLA Coupe, the German automaker made an important step forward by adding a facelift for the entire range. Besides the exterior and interior upgrades, the 2024 model-year CLA 35 4Matic Shooting Brake also received improvements for the drivetrain.

Sporting the same Panamericana grille as the rest of the AMG range, the CLA 35 4Matic Shooting Brake was also fitted with the new, redesigned LED headlights as the rest of the CLA range, produced either under AMG or Mercedes-Benz badge. From its sides, the car looked similar to its Coupe sibling, albeit it was different from the B-pillars rearward. There, the arched and slightly sloped-down roof line was extended behind the C-pillars onto the raked-forward D-pillars that ended the vehicle with a curved tailgate.

Changes continued on the interior, where the automaker introduced new color combinations for the upholstery. Thus, from 2023, this version was available with either gray-black or red-black combinations. On the dashboard, the automaker installed two 10.25” screens behind a commonly-shared glass, leaving the impression of a continuous wide display. The one fronting the driver was used for the instrument panel, while the one mounted atop the center stack featured touch functions and was used for the infotainment system.

Under the hood, beside the belt-driven starter-generator, stood the same transversely-mounted inline-four turbocharged powerplant that sent the power in all corners via a new AMG SPEEDSHIFT DCT 8G automatic (dual-clutch) gearbox. Thanks to the new drivetrain, the CLA 35 4Matic Shooting Brake could push the car from 0 to 100 kph (0-62 mph) in a mere 4.9 seconds. 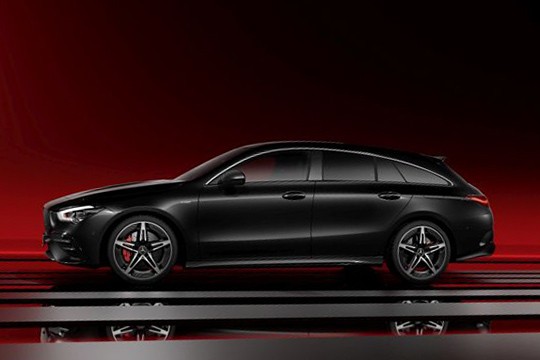