The 2015 McLaren 675LT made its debut at the Geneva Motor Show and it was the lightest and most track-oriented McLaren at the time of its launch.

The Long Tail, or LT, was a faster McLaren 650S. It was built in only 500 units and all of them were sold before the last one entered the production lane. The LT was for the McLaren what the Superleggera was for the Lamborghini or the Speciale for the Ferrari. A fast car that just became faster.

From the outside, the increased number of carbon-fiber elements was increased. The spoiler, with its large air-scoops, the side air-intakes for the engine, and the rear-view mirror cases were made out of carbon-fiber. In the back, a newly developed wing was attached to the car. It wasn't a particularly long element, but it was longer than the one found in the 650S. In the back, the entire lower part of the bumper and the apron were made out of carbon-fiber. Due to roof removal, the car was heavier by 43 kg (103 lbs) than the coupe. But that didn't matter. It was still a very light hypercar.

Inside, there was a minimalist design. A portrait-type infotainment unit was installed on the center stack. The instrument cluster was not revolving or something else. It was fixed, like in a regular vehicle. As for the seats, they were also made with racing technologies and, as expected, they had a race-bucket shape. The retractable hardtop was stowed below a cover, and the engine remained visible through a lightweight vented polycarbonate engine cover.

The engine was reworked and it developed 675 hp, 25 more than the McLaren 650 S. But that wasn't all. The stiffer suspension, the wider track, and the revised aerodynamic made it more capable on the track. 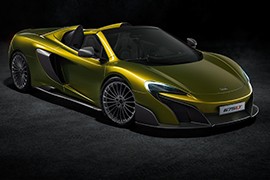