3 Check Out Lando Norris' Very Own McLaren Artura, Which He Himself Designed

4 Nia Long and Terrence J Lived It Up in Dubai, With Beyonce Concert and a McLaren

The 2015 McLaren 675LT made its debut at the Geneva Motor Show and it was the lightest and most track-oriented McLaren at the time of its launch.

The Long Tail, or LT, was a faster McLaren 650S. It was built in only 500 units and all of them were sold before the last one entered the production lane. The LT was for the McLaren what the Superleggera was for the Lamborghini or the Speciale for the Ferrari. A fast car that just became faster.

Inside, there was a minimalist design. A portrait-type infotainment unit was installed on the center stack. The instrument cluster was not revolving or something else. It was fixed, like in a regular vehicle. As for the seats, they were also made with racing technologies and, as expected, they had a race-bucket shape. The 675LT had roll-cage on the options list. It was installed behind the seats to increase the rigidity and, just in case, to save the occupants. It weighed only 4.3 kg (9.5 lbs) and it was made out of a titanium alloy. 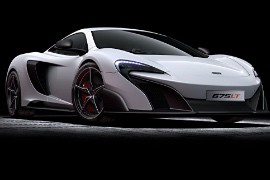