The 2014 McLaren 650 Spider came with a different design concept created by the same company that wrote a few chapters in the Formula One book.

And it shook the supercar roadster party.

The British McLaren company is responsible for the introduction of carbon-fiber technology into Formula One. It is easy to understand why it is one step ahead of everybody when it comes to making carbon-fiber road-going cars. And the 650 Spider is no exception.

Usually, a roadster is heavier and softer than a coupe due to added weight for strength. But McLaren always made open-top carbon-fiber vehicles such as the Grand Prix race-cars. Their engineers know how to do it and they applied their knowledge to the road-going cars. And when they took the roof of a McLaren 650, only 40 kg (88.2 lbs) was added. Most of that mass came from the Retractable Hard Top mechanism. The roof could be raised or lowered in less than 17 seconds and it operated at speeds up to 30 kph (19 mph).

The cabin was fully trimmed in Alcantara and the car offered a luxurious, well-equipped cabin. It offered a big touch-screen for the infotainment unit and bucket-seats for both comfort and stability on hard cornering. For a better engine-sound experience, the rear heated window could be lowered so the engine sound could be heard better inside the cabin. 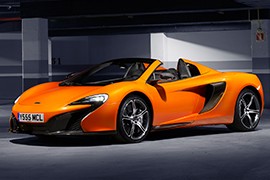