In 2015, McLaren completed its three-tier model lineup by unveiling the Sports Series family and the first model to be part of it, namely the McLaren 570S Coupe.

Inspired by the other models in the stable, the 570S takes McLaren’s design one step further with large arched LED headlights and taillamps, intricately sculpted dihedral doors with a floating tendon that channels air into the side intakes, flying buttresses at the rear, a new diffuser at the back and more.

Stepping inside, you’ll find the most driver-oriented cabin ever engineered by McLaren. The design is focused on visibility, functionality and engagement. Standard features include leather sports seats, leather-trimmed steering wheel and dashboard, a new TFT digital instrument cluster, a 7-inch IRIS touchscreen infotainment system and a lot of other optional equipment on the list.

Mechanically, the McLaren 570S still uses a carbon fiber monocoque and aluminum body panels, managing to offer the best power-to-weight ratio in its segment. The engine is an evolution of the 3.8-liter twin-turbo V8, sending power to the rear wheels via a 7-speed SSG gearbox. 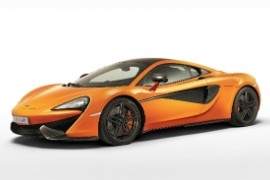