Completing the McLaren Sport Series is the 2016 570GT, a model built for increased comfort and everyday usability.

Apart from minor visual tweaks, the McLaren 570GT comes with an extra 7.8 cu-ft of storage space behind the seats and over the engine. McLaren calls this a "Touring Deck" and it's accessible via a side opening hatch that kind of reminds of the one used by the Jaguar E-Type Coupe. It opens from the curb side and it's reinforced with carbon fiber to increase rigidity. Other features include a tinted panoramic glass roof, two-stage automatic air conditioning, tweaked suspension and a new set of rims. 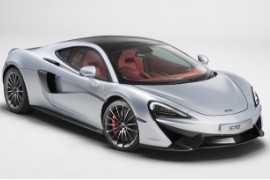