Every carmaker has one lowest-priced vehicle, and McLaren had the 540C in 2015 as the entry-level supercar, even though it's hard to call a supercar an entry-level vehicle.

McLaren tried to get more customers from other brands who created more affordable alternatives to the British manufacturer's 570S and introduced the lower-spec version of that supercar in the form of the 540C. Even if it sported a six-figure price tag, it was still more affordable.

The 540 Coupe was built on top of a carbon-fiber MonoCell II chassis adapted for day-to-day driving usability. As a result, its look resembled its bigger brother, the 570S but lost some of the aerodynamic elements that made the S a fierce track competitor. Thus, the Coupe lost the blades under the front bumper, redesigned for a less-aggressive look. Still, the lower part featured wide air intakes needed to cool the brakes and the radiators placed upfront. Moreover, the side sills were less profiled and not so low to the ground, so the driver shouldn't be worried about speed bumps. Yet, the mid-engined supercar kept similar black side air-intakes for the engine, and there was no wing at the back. Yet, the rear bumper showcased a big diffuser that also hosted the two exhausts on the outer sides.
Inside, the carmaker extensively used the leather on the seats, door cards, and lower door areas. In addition, a 7" IRIS touchscreen infotainment found its place on the center stack. Moreover, it incorporated the HVAC control unit. As expected, the sports seats wore high-bolstered areas.

Behind the cabin, the carmaker placed a twin-turbocharged 3.8-liter V8 engine that provided enough oomph to the rear wheels to rocket the car from naught to 62 mph (0-100 kph) in 3.5 seconds. 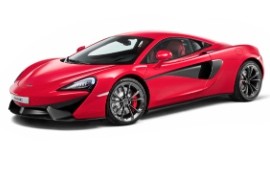 1 McLaren Might Lose in F1, But They Won Toy Vehicle of the Year With LEGO