Mazda opened a new chapter in its history when it introduced the first generation of the RX-7 in 1978.

While it was not the first car fitted with a Wankel rotary engine, it was the first car Mazda produced to stir the international sports car market. It was unusual in every way, and the carmaker sold it in high numbers.

Matsaburo Maeda designed the car as a lightweight sport-coupe. He placed the engine behind the front axle, and thus it helped with the weight distribution. Since the engineers pushed the engine back, the front was very narrow and, thanks to its pop-up headlights, very aerodynamic as well. The raked windshield and the short roof were followed by a long and sloped rear window, which was also the trunk lid.

Inside, the carmaker managed to offer four seats, but those in the rear were too small actually to allow someone bigger than a puddle to sit there. At the front, the dashboard was rounded, with circular vents on the outer side and rectangular in the middle. The instrument panel featured a tachometer marked up to 8,000 rpm, with a red-line starting at 7,000 rpm. That was motorcycle territory!

Under the hood, Mazda installed small, 1.2-liter, and 1.5-liter engines with a twin-rotor design. Depending on the engine version, the RX-7 featured a 4- or 5-speed manual. A 3- or 4-speed automatic was offered as an option for the U.S. market. 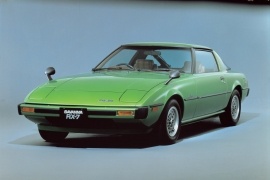