2 Mazda Will Invest Billions of Dollars in EVs, but It Won't Bother Hurrying Up

The third and last generation of the RX-7, known as the FD, 2-door sports coupe was manufactured in three Series, 6, 7 and 8, and was based on a 2.6L Wankel rotary engine positioned behind the front axle. A total of three outputs were available, 236 HP, 255 HP and 276 HP, all of them joined by a manual, 5-speed transmission as standard. Optionally, a 4-speed automatic transmission could also be fitted. Braking efficiency and fading resistance were improved thanks to the all round ventilated discs. The FD RX-7 was declared Playboy's Car of the Year in 1993 and numerous publications rated it as one of best sports cars. 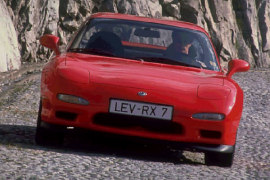