However, it lived on in other parts of the worlds.

The small car built by Mazda was sold under many names. It was also known as the 616 and 618 in the US, and the model featured a piston engine.

Assembled in New Zealand, it was the first passenger car that offered a rotary engine and the RX-2 was actually an option package for the Capella.

The 1971 version could be easily recognised by the indents in the front bumper for the blinkers, hood air vents, interior door cards, the antenna placed on the rear, the coupe badge on the rear trunk lid and shortened bumpers.

The RX-2 features air conditioning, power antenna and radio. In the front, the RX-2 had discs brakes and in the rear it was equipped with drums.

The model was a rear-wheel-drive with the power transmitted through a 4-speed manual gearbox for the coupe or a 3-speed automatic for the sedan.

The Mazda RX-2 was a tremendous success due to its high power combined with performance. The rotary engine produced 130 hp and 158 Nm. It was a 2.3-liter powerplant. 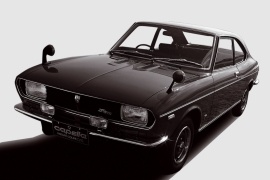