The most sold roadster in the world, Mazda MX5/Miata, received a facelift for its third generation in 2008.

It was the last stint before it was changed in 2015.

Named MX5 in most of the world and Miata on the North American market, the little roadster from Mazda gained popularity due to its light construction, low running cost, and reliability. It was a true daily driver, but with a sporty look and an open top.

The third generation had the NC code name. It was introduced in 2005 and it was the first Miata that featured a retractable hardtop, designed by Webasto in Germany. The front fascia was slightly improved over the non-facelifted version, featuring a new bumper and lower apron. The grille was modified with the five-point grille design, between the redesigned headlights. New triangular fog-lights were installed.

Inside, the NC featured the same interior, which was considerably bigger than on the second generation, the NB. The retractable hard-top, which was introduced in 2006, was kept. It added only 37 kg (81.5 lbs) to the total weight of the car and it was stored behind the seats. The transverse piano black trim from the dashboard was changed to silver.

The car was fitted with a new development of the MZR 2.0-liter engine, which now produced 160 hp. It was mated to a new, 6-speed, manual gearbox, and a 6-speed automatic was on the options list. The 2.0-liter version was fitted with a standard limited-slip differential. 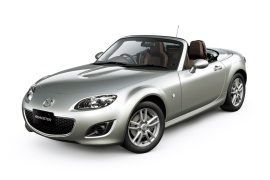