Nobody knew what a huge success the Mazda MX5 will have when the car was launched in 1989.

The little 2-seats roadster was sold in over 400.000 units. And that was only for the first generation of the Mazda MX5 – Miata as it is known in the North-American Continent.

The Mazda MX5 NA, the code-name for the first generation of the Miata, was a simple roadster, built on the idea of a British roadster, but with the Japanese reliability. It was not a fast car, or quick or luxurious. It was a simple, reliable, nimble vehicle that could be driven daily, year after year.

The design was plain and simple, with the grille incorporated into the lower part of the bumper. It looked just like a smiling mouth and, with the pop-up headlights, the front of the car looked like a smiling face.

Inside the cabin, there was room for two passengers, but not so tall. The headroom with the soft top up was limited. The Miata won a lot of customers due to its driving position with the legs almost stretched under the dashboard and low seating position. The instrument cluster had the most important four dials for a sports car: fuel gauge, coolant temperature, tachometer, and speedometer. An interesting sound system for that era was offered as an option for Radio-Cassette-CD Player. 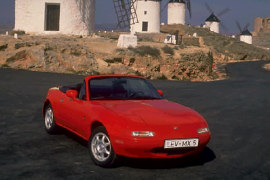 1 Toyota-Powered Mazda RX-7 FD Is No Parking Lot Princess, It's a No-Nonsense Shredder