Made as a factory-sleeper, the Mazda 6 MPS was a real wolf in sheep clothes that could outperform many sporty vehicles, including its Japanese competitors.

Mazda was the first Japanese carmaker that won the 24h of LeMans race, and its motorsport heritage was great, but it wasn't known for sporty sedans. The 6 was designed as a family vehicle and shared its platform with Ford Mondeo. But the 6 MPS was a different kind of animal. Its turbocharged engine and the all-wheel-drive system placed it directly against more acclaimed cars such as the Subaru Impreza WRX or the Mitsubishi Lancer Evolution.
A trained eye would have instantly noticed the differences between the MPS and the rest of the 6 range due to the power-dome on the hood and the wider grille at the front. A broad additional grille took center stage on the bumper flanked on the sides by air-intakes that cooled the front brakes. Its 18" light-alloy wheels were unique for the version. In the rear, a lip-spoiler and a dual exhaust system completed the sporty look of the sedan.

Inside, the carmaker failed to create the same sporty interior as the exterior and kept the same bland look as for the rest of the range. The regular seats with small side bolstering didn't match the car's cornering abilities. Apart from the polished aluminum pedals, it was just another Mazda 6 designed for families but with leather instead of fabric upholstery.

Mazda installed a turbocharged 2.3-liter engine under the hood, paired to a 6-speed manual gearbox that sent the power in all corners. Its front and rear independent suspension and stiff dampers significantly improved the car's cornering abilities. 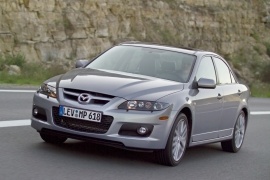 2 Toyota-Powered Mazda RX-7 FD Is No Parking Lot Princess, It's a No-Nonsense Shredder