Mazda refreshed the third generation of the 6/Atenza range twice after the initial car launch in 2012 at the Moscow International Automobile Salon.

It was the first generation of the Mazda 6 developed without Ford looking over its shoulders, and the Japanese designer Akira Tamatani went wild with it. The Kodo-soul style showed a vehicle that was better fitted in the large sedans than in the mid-size segment. Mazda didn't care about that: all it cared was to have a breathtaking looking flagship sedan, and it had it.

The first facelift came in 2014 and showed small differences in the door mirror's turn signals and a few tiny details. In 2018, Mazda designers drastically improved the already beautiful sport sedan with LED headlights and a wider grille that made the car looks lower to the ground. The carmaker included a new set of 17- and 19" light-alloy wheels in the options list.

Inside, Mazda carried over only the steering wheel and a few trim parts from the second-facelift. The climate-control unit looked very similar to the one found in a BMW 3-Series, and it was installed lower on the center stack, just above the center console. The carmaker noticed that it was no longer that relevant; hence it offered an automatic function. An MX5-inspired infotainment display found its place on top of the dashboard. The driver could control it via a rotary knob placed on the center console. For excellent sound quality, Mazda installed a Bose sound system.

Under the hood, the Japanese carmaker installed a choice of two gasoline and one diesel engine, offered in a wide power range between 145 hp and 227 hp. 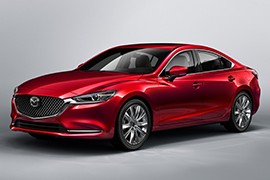