4 Mazda Bongo Friendee Is a Crazy JDM Camper, It Could Teach the Volkswagen Eurovan a Lesson

Mazda unveiled the third generation of the Premacy/5 lineup at the 2010 Geneva Motor Show, and it was designed as an ultimate family MPV.

While the customers were already looking for crossover-SUV vehicles, a few carmakers tried to keep the MPV spirit alive. Mazda was one of them, and it built the third generation of the 5/Premacy on the same platform as the compact 3 model.

From the design point of view, there was already a clear departure from Ford's management. Mazda's front fascia was changed into a smiling face with a grille that looked like an open laughing mouth. The headlights resembled those installed on the Mazda 3 series. On the sides, a wave-like sculptured door panels and made a clear impression of movement. Despite the big rear area, the tailgate didn't look like it was stolen from a shed and bolted on the car. Its sweeping, V-shaped lower line and the big taillights formed a well-balanced proportion between metal and glass areas.

But the essential part of the car was the interior, where the carmaker installed seven seats on three rows. The last row was in the trunk and, as expected, could fold flat into the trunk area. The second row was tilting and sliding to allow easier access in the back. Also, the middle seat could have been folded and used as an armrest or a storage compartment. At the front, Mazda tried to offer a good driving position for the Premacy, regardless of the driver's height.

The Japanese carmaker installed a wide engine choice under the 5/Premacy's hood. Depending on the market, Mazda offered gasoline or turbo-diesel versions, paired to manual or automatic transmissions. 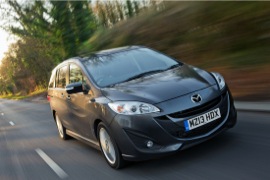