The fourth generation of the Mazda 2 was unveiled at the Geneva Motor Show in 2014.

It was the first Mazda 2 built from scratch after the separation with Ford Motor Company.

Mazda shared its components and platforms with Ford for a long period of time, when Ford owned a part of the Japanese car-maker. In November 2008, Ford sold 20% of its shares in Mazda, reducing its stakes at 13.4%. And the technology exchange slowed down. The last remaining Ford stakes in Mazda were sold in 2015. By that time, the Japanese car-maker was on its feet, fighting to revive its brand as an independent constructor and the Mazda 2 was one of the key vehicles.

With a design language similar to the compact-sized Mazda 3, the 2 featured the same “Kodo” language. It meant curved surfaces “in harmony with nature” as the officials said. A big, pentagonal, grille stood like a shield in front of the car. A big opening in the front bumper suggested the sporty character of the car. It wasn't completely untrue.

Inside, the car was well designed and proportioned. Depending on the trim level, a sat-nav system with a rotary knob controller between the seats was a carry-over from its bigger brother (or sister), the 3. According to its small-segment stature, the 2 was spacious enough for four (maybe five) adults and it still had some trunk to be used for weekly shopping.

For the engine compartment, the SkyActive engine family with 1.3- and 1.5-liter engines. Apart from the base engine, which was mated with a 5-speed manual, the others were mated to a 6-speed manual. An option for a 6-speed automatic was available. 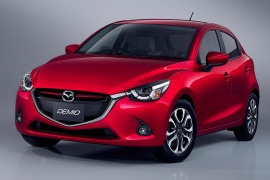