Mazda introduced the second generation of the 2 in 2007, and it was a huge improvement over its predecessor, which was more of a small-sized MPV.

With the introduction of the 2007 Mazda 2, the Japanese carmaker heralded a new era in its small-sized segment. Not only was the car designed using a fresh concept, but it was built on the same platform as the Ford Fiesta's sixth generation, which was praised for its qualities.

It was one of the best-looking vehicles in the small-sized segment and a fine example of the bio-design trend. Yet, Mazda named the 2's design language Zoom-Zoom, also featured on the 2002 Mazda 6. In those years, people were still eager to get a three-door hatchback in that segment, and the Japanese automaker felt obliged to provide it. Thus, unlike its five-door sibling, the 3-door version sported wider doors and a small, triangular side rear window. Yet, the carmaker didn't install a pop-out opening system for it.

Mazda tried to make the 2 more affordable, so it didn't focus too much on high-quality materials. The dashboard, available in a black and silver combo, was made of hard plastic. Yet, customers didn't complain since it was very easy to keep it clean. Unlike its five-door sibling, the three-door version received fold-down bucket seats at the front that allowed access for passengers sitting on the rear bench.

Its underpinnings were shared with the Ford Fiesta, with McPherson struts at the front and a torsion beam at the back. Thanks to its low overall weight, the 2 was a very nimble car with good fuel efficiency, especially if fitted with the 1.6-liter turbodiesel engine. 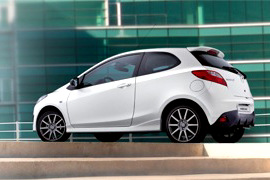