They shared the same chassis, but with different wheelbases. And some were very rare, such as the model 42.

WWII already started in 1939 when the first SW42 rolled out from the factory, but it was the same as before: the chassis was built by Maybach and then the bodywork was supplied by other companies such as Glass, Spohn, or Vysoke Myto in Slovakia. The last vehicle built over an empty SW42 chassis is believed to be the Erdman&Rossi in 1949 for an East Germany official.

The main idea of the time was that a custom-built needs to be done by special workshops and the chassis, drivetrain, and engine to be built by another workshop. From the 133 chassis built by Maybach for the SW42, The main difference between the SW38 and the SW42 was the engine displacement. Due to the shortage of better fuel, which was used by the German Army, the car-manufacturer had to lower the compression ratio up to 6.6:1, instead of the regular 8:1. Due to that, the power output dropped. But Maybach didn't want its cars to be sluggish and slow. With the increase, it obtained the same 140 hp from the straight-six unit. The carburetors were also modified for the lower-quality fuel.

The interior of the Maybach 42, regardless of the bodywork, was built with high-quality materials. An interesting quality of the vehicles, especially for those built by Spohn, was that they featured electrically operated windows. 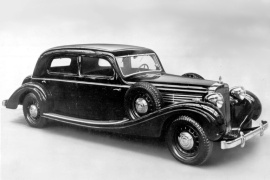