Maybach was struggling to survive in the luxury market segment where Mercedes-Benz started to increase its presence, and the German carmaker developed the SW 35 lineup to survive.

With the German economy starting to rise again after the Great Depression, Maybach saw this opportunity to launch a new range of vehicles. Like its main competitor, Mercedes-Benz, it created a new chassis and a new drivetrain and offered it in various shapes and sizes.

The SW35/38 came with a typical design for those times. Unlike Mercedes-Benz, which placed the car's headlights on a curved cross-beam between the front fenders, Maybach mounted the headlamps onto the sides of the engine compartment. Thus, they could leave the front of the radiator completely exposed, helping the cooling system. Also, the chromed rim of the radiator and the vertical slats were easier to see and looked different from other luxury brands from that era. Still, they had to stick with the curved, long wheel fenders interrupted only by the side-mounted spare wheels, one on each side of the car. The long slope from these went all the way to the rear fenders, which were also wider than the cabin. Fitting four doors on the vehicle was not easy for an open-top bodywork, but they made that by mounting the hinges on the B-pillar.

With a cabin fit for kings, the Maybach SW35/38 offered enough legroom for all four occupants. Thanks to the front-hinged rear doors, the driver could quickly open them as soon as the car stopped. Its passengers could easily step down from the vehicle with the aid of the bars mounted on the seatbacks of the front seats. Moreover, they could roll down the side windows.

Under the hood, Maybach started the lineup with the 3.5-liter engine, but when the higher-grade fuels became scarce and reserved mostly for the army, the carmaker increased the engine displacement to 3.8-liter, so the cars could provide the same power. 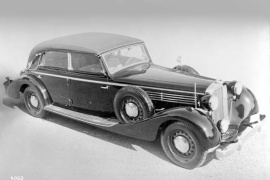