After the Great Depression, Germany started to get back on its feet, and Maybach struggled to survive in a market segment dominated by Mercedes-Benz.

Still, it didn't want to give up.

Unlike its main competitor, Maybach didn't know how to build affordable cars. Unlike Mercedes-Benz, which created new cars from scratch, it tried to make the same big, imposing vehicles but fitted with smaller engines. The Typ SW35/SW38 was developed just after the Great Depression and was created as a luxury car with an inline-six under the hood.

Maybach already had its way of creating cars and applied them to the new model. It mounted the headlights on top of the curved, wide fenders that flanked the engine compartment. Thus, it cleared the cooling area in front of the radiator. Just like other Maybach products, this one featured an imposing tilted and slightly V-shaped grille-mounted behind the chassis's endings, so it could be protected. Behind the curved fenders, the manufacturer mounted the spare wheels, one on each side of the vehicle. Depending on the customer's specifications, it could install rear-hinged or front-hinged front doors while the rear ones were rear-hinged. Thus, when both doors were opened, they created a vast area between the A- and C-pillars. It was a daring innovation, but since the SW35/SW38 was built on top of a chassis, it did work.

The cabin was luxurious, boasting a full leather-wrapped interior. Its front bucket seas were wide and sported grab-handles behind their seatbacks. That helped the rear occupants with their ingress and egress from the vehicle.

Unfortunately, the weak 3.5-liter engine produced just a mere 140 PS (138 hp), and it was paired to a four-speed manual gearbox plus overdrive. After Germany decided to decrease the fuel quality on the market, Maybach increased the engine's displacement to 3.8-liter to not lose power. 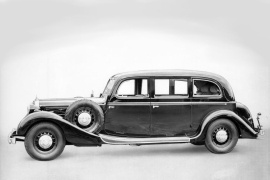 1 Rapper Fabolous Keeps It Fancy With a Maybach Landaulet, the “Paybach”

3 What If... Mercedes Diluted the Maybach Brand with a Less Pricey Mercedes-Maybach C-Class?

5 Is Your Wardrobe Missing a Pair of Water Buffalo Horn Shades? There They Are!