The Maserati MC20 was the first supercar built by the Italian brand after 16 years and it was built not only to impress but to attract more buyers for the struggling brand.

Maserati had the designers and the engineers to build a supercar but it was not allowed to do it because of its parent company, Ferrari. Slow sales and an uncertain future convinced the prancing-horse car-manufacturer to allow them to build one. It was the MC20, launched in September 2020.

After two thousand man-hour labor in the Dallara Wind Tunnel and more of a thousand on the computer simulation, the result was a streamlined aerodynamic mid-engine supercar. The white part of the car was dictated by the designers while the black and dark parts were imposed by the engineers. Apart from the grille in the nose, which resembled other Maserati products, there was nothing to looks like any of the other brand's products.

The interior featured a digital display for the dashboard and another one for the infotainment system. The bucket seats were carefully crafted with Alcantara and leather. The controls for the 8-speed automatic gearbox were placed on the center console.

The engine was a twin-turbo 3.0-liter V6 and it offered 621 hp, exactly the same as the previous Maserati MC12 supercar, which was designed for the racetrack. The 8-speed, dual-clutch, automatic gearbox was the same as the one used on the Ferrari Portofino M. 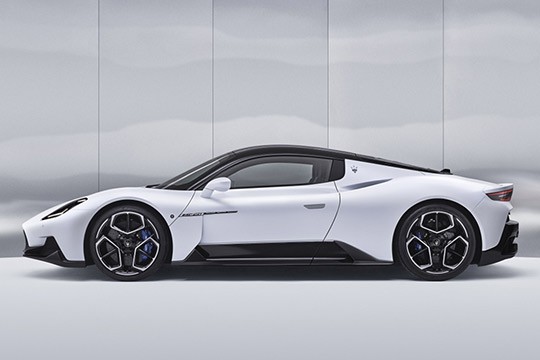