It was the most powerful and the fastest Maserati from the Italian car-maker.

It was the hard-core version of its well-known GT model. And it wasn't a GT anymore.

Maserati has a long history in motorsports. It won races on most European tracks and its conversion toward GT cars was not unusual. But it still didn't forget its past and glory. The MC Stradale was just the kind of car that someone would buy for weekend track-days, in the same way, that someone would buy a Porsche Carrera GT3 RS.

The MC Stradale was a stripped-down and rebuilt GranTurismo, with more carbon-fiber, more power, and fewer seats. The exterior look was slightly different than the regular model. It had a new front splitter, bumper, hood, front panels, side sills, exhausts, and even a new rear bumper. Overall, it lost 110 kg (242.5 lbs) from its initial weight.

Inside, most of the soundproofing materials were gone and so were the rear seats. Instead, on the options list, the manufacturer added a roll-cage and four-point racing harness. Some comfort features were kept, such as the air-conditioning, the power-windows, or a basic infotainment system. The car had to be legal to drive on the road, but fierce on a race-track.

The engine was upgraded and offered 10 hp more than the regular GranTurismo and it was mated to a re-tuned 6-speed automatic transmission only. 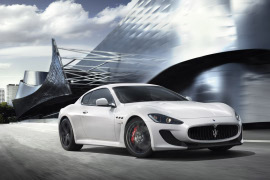