Maserati introduced the replacement of the Coupe in 2007, at the Geneva Motor Show, and named it GranTurismo, trying to offer a competitive grand tourer with a flair of premium feel.

Unlike its predecessor, the 2007 GranTurismo was more or less a Ferrari California since the two cars sported the same drivetrains, albeit differently tuned for each brand. While the GranTurismo was made especially for long, comfortable rides, its Ferrari sibling was built to handle better on a track.

Maserati employed Pininfarina design studio to pen the car, which was astonishing for those times. It featured a broad grille in the bumper flanked by the foglights on the lower side and by the swept-back headlights on its upper area. The carmaker placed the specific four cuts on each of the front fenders on the front bumper to remind users that it's a V8 sports car. The raked windshield led the way to the greenhouse and ended in a sloped rear area. At the back, the short trunk lid was enhanced by a small spoiler. Finally, under the rear bumper, Maserati placed a quad-exhaust system.

Jason Castriota created the GranTurismo interior with a profound sense of luxury. Even though the front bucket seats featured high-bolstered areas, they were leather-wrapped, like the rest of the cabin. The dashboard, instead, received special attention for the infotainment center placed atop the center stack. While the front passengers could enjoy a long ride, the rear occupants were not that happy on sharing the same legroom or headroom.

Under the hood, Maserati used of the 4.3-liter powerplant developed by Ferrari and mated to a six-speed automatic gearbox provided by ZF. 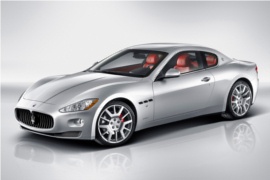