The name wasn't new, but it was the first Ghibli to be offered as a four-door vehicle, which the Italians said it was a four-door coupe.

With the increasing market for the sports sedan vehicles, Maserati took the Ghibli name from its warehouse and installed it on a brand new vehicle. It used the same platform as the Quattroporte and the Levante SUV. The refreshed version added more power and, of course, an Euro 6 homologation certificate.

The exterior design remained the same as before, but the car-maker introduced two trim levels: Luxury and Sport. With its sporty, coupe-like, look, the Ghibli was the shorter version of the brand's flagship, the Quattroporte. The headlights converged toward the Trident, with every angle designed to draw the attention to Maserati’s legendary symbol.

Inside, the Ghibli received a new dashboard and a brand new 8.4” infotainment system, which was Android Auto and Apple CarPlay compatible. The instrument cluster featured large analog dials dor the speedometer and tachometer, plus a 7” TFT display. On the latter, major dynamic functions were incorporated into the buttons next to the gear-stick, while other on-board settings could have been set via the Maserati Touch Control Plus rotary knob placed in the center of the dashboard. The 7” TFT display was accessed via the steering wheel buttons.

Under the hood, the Ghibli received a new update for its engines. The gasoline units were produced by Ferrari, its parent company, while the diesel version was offered by Fiat Power Train (FPT). Standard transmission was an 8-speed automatic. The top-model, named SQ4, was offered with an all-wheel-drive system. 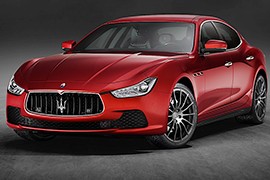