It took Maserati a year and a half to launch the open-top version of the MC20 model, but the revolutionary features that were installed on the car were worth it.

Maserati was the less-glamorous brand of the Ferrari and competed mainly against McLaren, and, unlike the prancing-horse badged car manufacturer, it offered a more luxurious environment. With the Cielo, the Italian carmaker provided a new experience, enhanced by the open top and hi-tech amenities.

The Italian brand unveiled the MC20 Cielo (sky) in the late spring of 2022, and even though it sported the same front fascia as the coupe version, it looked different from the A-pillars behind. Thus, a retractable glass roof that measured 5,268 sq-cm (5.7 sq-ft) was fitted with the PDLC (Polymer-Dispersed Liquid Crystal) technology that allowed it to be transformed from transparent to opaque at the touch of a button. Moreover, it could have been totally retracted in 12 seconds while the vehicle was on the move. But that came with the cost of an added weight of 65 kg (143.3 lbs).

To create a better experience for the driver and the side passenger, the carmaker installed butterfly-style doors opened upward and forward. Thus, it could offer a wider opening for easier ingress and egress. The ice-color Alcantara wrapped interior completed the luxurious image, yet sporty thanks to the design of the sports seats. Moreover, on the seats' headrests, the carmaker offered as an option hand-stitched trident embroideries. Also, the car featured an adjustable steering wheel, which was not provided on the 2020 MC20 Coupe.

Under the hood, Maserati installed the same twin-turbo V6 powerplant as its sibling. The Nettuno engine, as the carmaker named it, offered a peak power of 621 hp (630 PS). It was mated to a six-speed automatic (dual-clutch) gearbox. 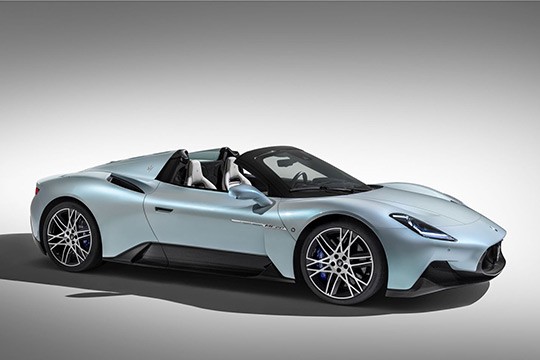 3 Maserati Levante Drives Down Historic Steps in Rome for a Selfie, Driver Is Arrested

4 Maserati Teaser Suggests MC20 Convertible May Be Coming This Month