Suzuki is known as a big manufacturer of small cars.

The three-box sedan Ciaz was built to replace the former Suzuki SX4 sedan, which was developed in cooperation with the Italian manufacturer Fiat. Its sleeker design made it look sporty, even if the manufacturer intended to create a cheaper alternative for the compact sedans in India. It also hoped to give a boost of the image of the Maruti brand into the upper market segment.

Inside, the Ciaz was well equipped and had a touch-screen infotainment system. The instrument cluster had four dials and a central information panel, placed between tachometer and speedometer. Since it had a standard dual airbag for the entire range and other safety features, it received a 4-star ANCAP (Asian EuroNCAP) rating.

For the engine, in India Suzuki installed gasoline and diesel engines. The most fuel-efficient version featured a 1.3-liter turbodiesel engine, developed by Fiat. For the transmission, the 4-speed automatic was available only on some gasoline units. The others had standard 5- or 6-speed manual gearbox. 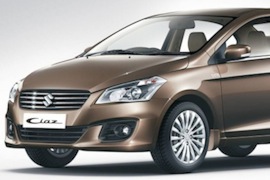