While vodka, caviar, and the Cold War might be associated with Russia, something else important came from there: the Marussia B1 supercar.

That's right! A supercar made in Russia tried to compete with high-performance cars with a mid-engine vehicle built with the help of Cosworth Engineering. Also, keep in mind that the car manufacturer benefited from the F1 experience since it was a partner in the Marusia-Virgin F1 Team with Richard Branson.

Marussia designed the B1 around an aluminum shell and covered it in more carbon fiber than most supercars from that era. The carmaker followed Collin Chapman's idea to make a car light instead of powerful. But it didn't leave aside the aerodynamic. Since it was a mid-engined vehicle, it sported a slim front area with triangular headlights and a raked and curved windshield. Two front air intakes cooled the brakes and helped to increase the downforce. A pair of vents behind the front wheels released the air trapped in the wheel well. Behind the scissor-type doors, the carmaker made the air-intakes for cooling the twin-turbocharged engine.

Inside, the carmaker installed a leather-clad interior with hand-stitching. There was not a single analog dial in the cockpit. Marussia opted for a digital instrument panel and two additional touch screens: one on the center stack and the other on the passenger side. A pair of slim, high-bolstered bucket seats provided the side support needed during high-speed cornering.

While it wasn't a compelling car, it had the same power to weight ratio as a Ferrari Italia. The carmaker built the Marussia B1 in three engine versions for specific markets. Unfortunately, the company was dissolved in 2014 when most of its 300 employees left and joined a governmental project for a luxury car. 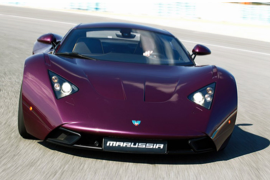 3 Marussia B2 Sold Out, Production Moving to Finland

4 Marussia B1 Russian Supercar in Monaco