The Indian producer Mahindra designed the Mahindra Thar for the people in the countryside, thus tried their best to suit their needs with the impressive off-road capabilities and the affordable price, the That being one of the most affordable SUV.

The That was launched in 2010 as a replacement for the MM540 model and the new design made it look like an older Jeep.

The classic ladder frame the car was built on was optimised for better handling.

The Thar was equipped with a 2.5-liter common rail engine developing 106 hp.

The exterior design of the Thar was square-shaped and minimalist, just as Mahindra described it: “less is more”.

The big tyres completed the look, but it was not the looks that were the most important. The tyres, along with the 200mm ground clearance and the independent suspension gave the Thar incredible heavy duty off-road capabilities.

The interior was nothing more than basic, with a heater, instrument cluster gauges, door lock, gear knob and the lever switching to 4x4. The seats were not very comfortable either.

The SUV could reach 150 kph, but it was very unlikely for a car designed for off-road purposes to feel good at those speeds.

Surprisingly, the Thar had no roof. And while a ride in the desert would sound nice, imagine all the dust in your eyes. No worries, you can wear glasses if you’d like to see where you’re going. 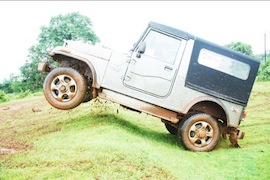