After a 7-year run, Lotus’ flagship finally got replaced in 2015.

The new Evora 400 got to continue from where the older model left off while improving both the sportscar’s image and specs sheet. It’s not a whole new model though, but a very intricate facelift to the original Evora.

The exterior isn’t drastically changed, but it does come with new bumpers, rims and paint schemes that make the Evora 400 look edgy and contemporary. The front end is more gaping and also houses LED daytime running lights, while the rear got more chiseled, two extra side vents and a redesigned wing.

On the other side, the interior is completely redone, coming with a remodeled dashboard, seats, door cards, central console, and a new steering wheel with shortcut buttons. A new infotainment system is also on the list of changes.

Mechanically is the part where the Lotus Evora 400 amazes, being 6 seconds faster than the generation before on the Nurburgring. That’s because the car is 22 kilos lighter, offers more power and comes with a revised suspension. 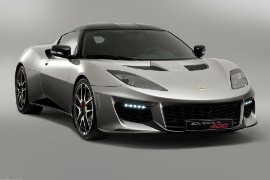 1 The Lotus Elan M100 Was a Beautiful Flop, Would Have Been a Success at a Lower Price

4 2017 Lotus 3-Eleven Looks Like a Toy Next to Trucks on the Highway, It's Still Fast