Lotus introduced the Emira in 2021 as its last vehicle fitted with an internal combustion engine.

It even announced its EV architecture a few weeks after the car’s presentation.

Built on the legacy of its appreciated predecessors such as Elise, Exige, and Evora, the Emira was a final statement about the famous British carmaker. It was like a beacon for everything achieved by the carmaker until then. Moreover, it was the first cooperation between Lotus and AMG, where the German company supplied the inline-four engines for the Emira.

With its sleek, aerodynamic design, the Emira looked like a supercar, except that it cost half of a well-equipped Porsche 911. Its fluid lines and the two wide cuts on the front trunk lid offered a unique image in the supercar segment. Those vents were used to divert the air gathered by the front-grille-mounted on the apron. A pair of side-scoops were used for venting the front disc brakes. On its sides, the short, arched greenhouse was ended on a long sloped deck over the engine compartment, which was in the middle. Wide, sculptured air-intakes mounted on the rear fenders gathered the air needed to cool the engine.

Inside, Lotus installed two sport bucket seats. The 12.3” digital instrument cluster showed all the car’s functions and was customizable depending on the driving mode. Above the center stack, an additional 10.25” touch-screen showed the info for the infotainment system, which also included the navigation.

Inside the engine compartment, Lotus offered a choice of two engines. The most potent version was a supercharged 3.5-liter V6 based on an engine block supplied by Toyota. The other option was the turbocharged two-liter four-pot unit provided by AMG. 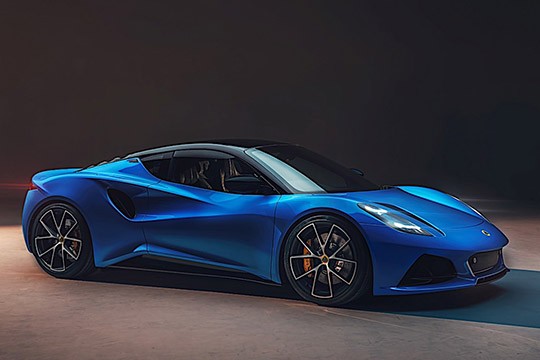