The Town Car was one of the last full-size American luxury cars, recognized for its smooth rides, reliability, and image.

The third generation of the Town Car was launched at the 1997 New York International Auto Show. It was the preferred base for the stretch-limos from most of the custom-car makers in the U.S. The Lincoln Town Car was the first car in history to receive the government's highest five-star government safety ratings four years in a row for all five categories – including rollover resistance. In 2008, Ford moved the Town Car's production lines into Canada to keep the car at a competitive price on the market, due to the world financial crisis.

Its distinguished design, with the chromed "waterfall" grille and quad headlights, was an imposing presence in Manhattan or any other business area. Its rounded edges were inspired by the Lincoln Mark VIII and the Continental. A barely raked windshield and a tall cabin were needed to offer a vast interior room. At the back, the almost vertically mounted rear window and the thick D-pillars offered both privacy and protection for the rear passengers.

Inside, the Town Car featured a luxurious cabin with ample legroom for all the passengers. There were two wide seats at the front and a wide bench in the rear, with an ample center armrest between the outboard seats. The thick windows and sound-deadening materials ensured a library-like quietness for its passengers. As one of the most important premium American carmakers, Lincoln used only top quality materials inside the limousine.

In 2007, Lincoln offered the car fitted with a refreshed 4.6-liter V8 engine that produced 239 hp. It was paired as standard to a 4-speed, heavy-duty, automatic transmission. 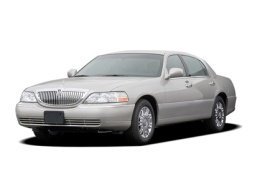