Lincoln introduced a much-deserved facelift for its vehicle's flagship, the Town Car, in 2003, and it showed a touch of modernism over a classic-looking executive car.

Ford decided that Lincoln had to do something with the Town Car to get new, younger customers in its showrooms. It was obvious that the former shapes didn't attract them and, from the technological point of view, it was outdated.

First of all, the front fascia was completely redesigned and included wrapped-around headlights. The grille was smaller, and it looked like a shield with vertical chromed slats. The aerodynamically profiled front bumper added a final touch of modernism. Someone was not ready to give up the fridge-like chromed door handles and kept them in place on the sides. In the rear, the carmaker installed new taillights and reduced the license plate area's size, which was flanked on the sides by the reversing lights. Another important novelty was the button-operated trunk release from the driver's seat.

Inside, it was a significant improvement. Its leather, vented, and heated seats offered plenty of space for five adults. Lincoln even added an option for six, with a 40-20-40 bench at the front. When the middle seat was not in use, an armrest with a storage box took its place. There was even a mobile phone connection, activated via a lever next to the steering wheel. Lincoln engineers and designers moved the buttons for the electrically operated seats on the door panels.

Under the hood, the Town Car relied on the well-known 4.6-liter V-8 built by Ford, and Lincoln paired it to a standard 4-speed automatic gearbox. 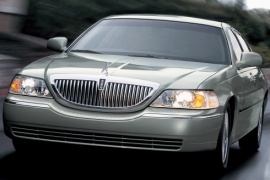