Lincoln introduced the third generation of its flagship model, the Town Car, in 1998 and showed a different approach to the market and a change of its targeted customers.

While the first two generations of the Town Car were addressed to those who did business with a cigar on a hand and a glass of wine on the other, Lincoln built the third generation for those who were more attracted to new technologies and indulged themselves with a glass of champagne and went more to the club than to the country club. It built it for the younger generations of entrepreneurs who were more attracted by technologies.

From the outside, the tall, vertical grille was gone, and a chromed, shield-like one took its place. It was slightly raked and showed a modern styling. Its wrapped-around headlights and aerodynamically profiled bumper with horizontal slats at the bottom completed the front fascia. The Town Car kept the cab-rearward concept with a long hood and a thick and vertical C-pillar from its sides. Only the rear windscreen was curved and raked forward.

Inside, the designers kept the straight lines and 90 degrees corner only for the dash's air-vents. The rest of it showed rounded corners and edges, plus an elegant oval clock in the middle. Wood-trims and leather were extensively used on the door panels and most of the interior. There was plenty of legroom in the back, and, as an option, the carmaker installed a mini-bar in the rear armrest.

Under the hood, Ford provided a 4.6-liter engine for its luxury brand and offered it three power outputs between 203 and 238 hp. 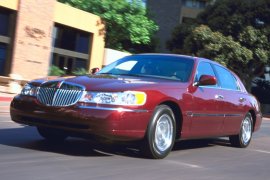