The biggest Lincoln on the market was the Navigator.

And if the normal-sized Navigator was not enough, there was a long-wheelbase version. Both of them were able to carry up to 8 people inside.

While the Lincoln Navigator was often named a re-badged Ford Expedition, the 2018 Navigator was built to cut that impression, even though it sits on the same platform as the blue-oval parent company model. The biggest difference is on the image and on its luxurious features that could make other premium car-makers to run back to the drawing board. Both versions were built upon a Ford F-Series chassis and the longer version was on a heavy-duty one.

The size of a Navigator was expressed especially by its front chromed massive grille with a mesh-look design. The big and wide headlights with their LED running lights also made the car look larger. The automatic retractable sidestep was still offered as an option, for easier access in the vehicle.

Inside, the Navigator was offered three rows of seats and up to eight passengers seating. While the rear row was good for accommodating thee passengers, the middle one was offered with two or three seats. For the driver, the seat had up to 30 ways of adjustments, including a left-right mode for hip-support. The instrument cluster was a 12” TFT screen. For the infotainment system, a 10” touch-screen was installed.

Under the hood, the Lincoln Continental was fitted with only one engine option: a twin-turbo 3.5-liter V6 engine. It offered 450 hp and was mated to a standard 10-speed automatic co-developed with GM. 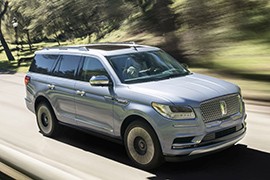