Not as marketed as the Cadillac Escalade, but still pretty much a presence in the full-size luxury SUV market, the refreshed Lincoln Navigator was released in 2015.

The updates introduced in 2015 were meant to keep the Navigator high, as most of the premium carmakers were updating their large SUVs. Without this update, the Navigator was in jeopardy on falling behind the competitors, as the old version was starting to look dated.

The exterior design was not dramatically improved, however, it was freshened with a split-wing grille and LED running lights. The headlights remained the same HID, while other options on the market were offering LED headlights.

Available in two wheelbases, the standard and the extended, the Navigator offered a roomy, comfortable and luxurious cabin. The 8-passenger interior saw much refinement and brought a more high tech feeling.

Probably the best part, the Navigator was fitted with a powerful 3.5-liter EcoBoost V6 engine that developed V8 levels of power. The unit developed 380 hp and was mated with a very smooth 6-speed automatic transmission.

A rear-wheel-drive system was standard, however, the AWD version was equipped with hill descent control and hill start assist. 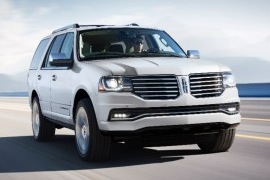