The Navigator was the first luxury SUV on the market, but since then, more carmakers have joined the niche segment and made life more difficult for Ford's luxurious vehicle.

With an impressive towing ability, the full-size SUVs proved to be very useful while going on long trips with the family and a trailer attached. While they were not so very useful or logical in congested city traffic, they still offered a high level of safety and a relaxed and comfortable ride, especially if the owner was chauffeured to the destination.

The third generation of the Lincoln Navigator was anything but subtle. Its massive grid-like chromed grille spread between the headlights was easy to spot from miles ahead. It replaced the older waterfall grille with vertical slats, which was no subtle either. Like the Escalade, the Navigator was a vehicle that proved a successful owner, not a subtle one. On the sides, Lincoln offered retractable side-steps that concealed gracefully into the rocker panels.

Inside, the carmaker installed an eight-seat interior, with folding second and third rows. The latter was easy to hide by a push of a button placed inside the trunk. Thus, it increased the cargo capacity to a cavernous level.

Despite sharing its chassis with the Ford F-150, the Navigator featured independent suspension in all corners and an option for air-bellows that could lower the back of the car for easier loading and unloading. Under the hood, Ford installed a 5.4-liter V-8 gasoline engine and paired it with a standard six-speed automatic. The all-wheel-drive system was optional. 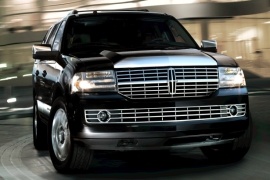