After switching from three-letter names to full names, Lincoln changed the former MKX into Nautilus.

But it wasn't just a name change. It was a different car.

American luxury vehicles usually meant big cars. In that segment of luxury, Lincoln was always present with either the Town Car limousine or the Navigator. But sometimes, a luxury car doesn't have to be huge or big. The Germans proved it with the GLC or BMW proved it with the X3. Considering this, Lincoln returned on the market with a compact SUV that entered directly against the midsize luxury SUVs.

Since Lincoln returned with its beloved and traditional way of naming the cars, it had to do it with something that had an appeal on a fast-growing segment in the market and that was the midsize SUV. The big grille in the front with chromed details and the LED headlights were imposing on the road.

Inside, there was the classic American luxury vehicle, with leather, wood and aluminum trim. The instrument cluster was a 12.3” TFT display and the gearbox was controlled via buttons on the top of the center console. The infotainment system was Apple CarPlay and Android Auto compatible.

The Nautilus was offered with two engine options mated to an 8-speed automatic transmission only. 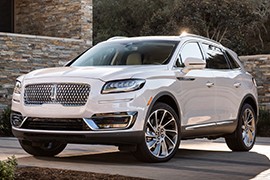