Ford was committed to making Lincoln relevant again in the premium segment when it launched the MKZ in 2013.

Even if it is based on the Ford Fusion platform CD4, which was also used on the European Mondeo, the Lincoln MKZ gave all that it takes to impress on all of its bits and pieces. For starters, there was a new interpretation of Lincoln's double-wing grille, which includes the headlights. The aggressive line didn't trade the image of a luxury sedan for a sporty vehicle. But it was odd to see the modern interpretation of the front end and the line for the taillights, that looked outdated even if it was with LED.

Inside, the luxury was the keyword. Leather bolstered seats with tons of adjustments available, high-quality materials used and a high-tech infotainment unit marked the move of Lincoln toward younger buyers. The Ford's SYNC 2 system was installed, but badged as "MyLincoln Touch". It could connect to a smartphone via a dedicated app, but it wasn't compatible with the Android Auto or Apple CarPlay. The big interior was achieved thanks to a big wheelbase, which allowed room for three adults. The MKZ had an optional big, openable, panoramic glass roof.

Under the hood, there was a 3.7-liter V6 unavailable on the Ford Fusion, but the 2.0-liter EcoBoost and the hybrid version were the same. The MKZ was available with either 2WD or all-wheel-drive. The only transmission available was a 6-speed automatic. 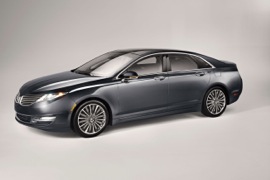