An upscale version of the Ford Fusion, the Lincoln MKZ was a refined and stylish 4-door sedan.

In 2010, the MKZ was refreshed and the updates included a redesigned front end with a wing-split grille, as well as a revised rear styling with larger LED taillights. The interior was also updated.

Compared to the Cadillac CTS, the Lincoln MKZ was more focused on offering a supple ride quality, rather then being as sporty as the CTS was.

Under the hood, the Lincoln MKZ was equipped with a 3.5-liter V6 engine that produced 263 hp. While not especially fast, the unit offered more than sufficient power.

The fully independent suspension was completely revised, and with the Sport Appearance package, it was even stiffer, besides the larger wheels it came with.

The interior of the MKZ was greatly finished with high quality materials and fitted with comfortable seats where legroom and headroom was never an issue.

In its base version, the Lincoln MKZ came with standard leather upholstery, dual-zone climate control, parking sensors, heated and cooled front seats, as well as Lincoln’s SYNC infotainment system. Optionally, a power sunroof, a dvd-based navigation and a back-up camera were available for an extra fee. 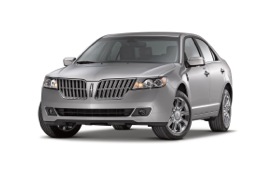