Introduced in 2006 at the Chicago Auto Show, the Lincoln Zephyr was a medium-sized vehicle based on the same platform as Mazda6/Atenza or the Ford Edge.

It had only a 3.0-liter V6 engine available from the beginning, offering 221 hp and 278 Nm (205 lb-ft) of torque. A year later, a 3.5-liter V6 joined the engine range. It was fitted as standard with a 6-speed Aisin automatic gearbox. Also in 2007, the Zephyr name was changed to MKZ until 2012. In 2011 it received a hybrid powertrain with an inline four-cylinder with a 2.5-liter displacement gasoline engine and an electric motor. The total output for the hybrid version was 191 hp.

The interior was typical for a Lincoln, with real ebony and maple wood installed in metallic frames. Leather seats were standard on all the trim levels. Electrically adjustable seats, a six-speaker audio system and dual climate control along with a big list of features were installed as standard.

Inside the 4.8 meter (15.7 ft) long vehicle, the rear seat legroom was decent due to the 2.7 m (8.8 ft) wheelbase. The Zephyr/MKZ was intended to replace the former mid-size Lincoln LS range, but with more fuel-efficient engines and front-wheel-drive. A facelift was introduced in 2010 and a new generation was launched in 2013. 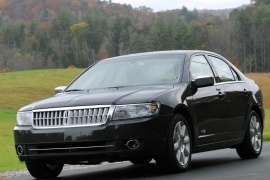