The second generation of the Lincoln MKX was unveiled at the North American International Auto Show in the beginning of 2015 and the sales started later that year as a 2016 model.

It was a leap forward compared with it predecessor.

It all started with a new platform, the Ford CD4, which was also used for the European Ford Mondeo and some other Lincoln sedans. It also shares the same platform with the Ford Edge. The luxurious SUV introduced new technologies into the Lincoln brand such as the adaptive steering and the optional adaptive LED headlights.

Visually, the vehicle was easy to identify as a Lincoln due to its double-wing front grille that expanded toward the front fenders and incorporated the headlamps. The new-technologies for the 2016 MKX went on and showed LED taillights and lamps in the mirrors that projected a welcoming message downwards when the driver was within 9 feet (3 meters) of the car.

Inside, numerous features brought the MKX into the premium brand territory regarding the materials used, finishes and options. But it had the Sync 2 infotainment unit that couldn't be paired with Android Auto or Apple CarPlay. It could be connected to a smartphone only via a dedicated app.

Despite its SUV shape and big size, the MKX was offered as standard with front-wheel-drive, while the all-wheel-drive was available at extra costs. At least, the standard transmission was a 6-speed automatic. 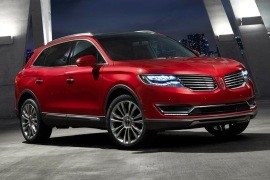