Lincoln MKX was introduced in 2005 as a 2006 model, and it represented the luxurious version for the Ford Edge.

With an increase in demand for crossovers and small SUVs, Ford had to adapt and introduced the Lincoln MKX for the premium-segment. It was offered as a smaller option for the Lincoln Aviator and entered the competition against other premium compact SUVs on the market, such as the Infiniti EX or the Acura RDX.

The chromed grille was kind of bald on the outside, with a grid and five vertical slats. On the lower side of the bumper, the MKX featured chrome-accented fog-lights. The 2006 model's standard wheels were 18" in size, and an optional 20" light-alloy wheels were available. Lincoln MKX featured dual chrome exhaust tips and brake lights backlit by LEDs with a light bar that crossed the MKX's liftgate in the rear.

The interior featured an instrument cluster with square dials for the speedometer and tachometer. The premium version for the Ford Edge featured better materials for the dashboard, seats, and the four-spoke multifunction steering wheel. Lincoln offered the MKX with a panoramic glass roof. The front seats were wide, while the rear ones were reclining up to 15 degrees. A split-folding rear seat seatback was installed to increase the trunk area from 32 cu-ft (906 liters) to 69 cu-ft (1953 liters).

For the drivetrain, the MKX featured a 3.5-liter V6 engine paired to a 6-speed automatic gearbox that could send the power to the front or all wheels. That setup was similar to the Ford Edge and the Mazda CX9. 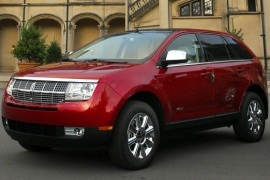