Jacques Nasser, Ford's CEO in 1999, said that the 2000 Lincoln built the LS to compete with other premium carmakers globally, and he insisted that the new vehicle should be sporty.

But Nasser didn't stay long enough in that top position to push the LS on other markets since he had to resign in 2001. The car lived longer than him at Ford, but only for another five years. It was a sporty sedan built mostly for other markets, and it didn't feel at home in the U.S.

The German Helmuth Schrader led the design team, and they made, probably, the most European Lincoln ever. It featured dual headlamps covered under clear glass, with corner-mounted turn signals. The grille was wide and short, while the wrapped-around plastic bumper featured a lower grille with horizontal slats flanked by squared fog lights. From its sides, the cabin featured a raked-forward rear windscreen, which was unusual for a Lincoln. In the back, the carmaker extended the taillights over the trunk's lid.

But the non-Lincoln features continued inside, where the carmaker offered an option for a five-speed manual. It was something that Ford's premium brand didn't have in decades. But the rest of the cabin was a mix of best of two worlds. It offered a wide tachometer in the instrument panel, wood-veneers on the dashboard, center stack, and door panels, plus a pair of cup-holders for the front passengers. In the back, the LS offered enough room for two passengers, separated by a tall transmission tunnel. 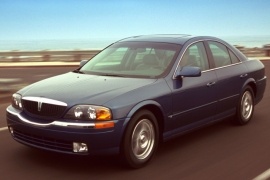