When Ford introduced the seventh generation of the Continental in 1982, it said that it would be the best handling Lincoln to that date.

Luxury cars were not about handling or quarter-mile time, but neither in a zero to sixty 'till tomorrow category. They had to offer a good balance between performance and comfort, with more accent on the latter. That's what the Ford Fox platform promised to be for the Continental MkVII.

The design was classic for this seventh Continental generation, with a flat front area and vertical radiator flanked by four squared headlights. On the sides, there were more chromed details around the wheel arches and on the side panels. In the back, the mid-size sedan featured a spare-wheel bump on the trunk's lid, even though the tire was mounted on the left. That sloped-down rear end made the cab-rearward design looked more dynamic in a way a luxury car could be.

Inside, Lincoln lived up to its name and prepared a cabin for four with high-quality velour on the seats. The dashboard was nothing more than a wide black panel stretched between the A-pillars, at the bottom of the windshield, when the ignition was off. As soon as the key was turned in, the black panel revealed the LED displays in front of the driver and above the center stack. Everything was digital, including the speedometer, the fuel level, and the coolant temperature. A dozen buttons placed on top of the center stack showed the information for the trip computer.

Under the hood, Ford installed a standard V-6 engine which was good to crawl into city traffic. The other choice was a 5.0-liter V-8 offered in three power outputs that could provide more excitement, but not too much. The carmaker installed disc brakes in all corners to ensure a higher level of safety. 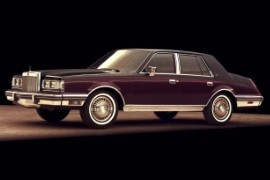