The sixth generation of the Lincoln Continental was a big leap in Ford's lineup and it was the bridge between the large Continentals and the mid-size sedan that followed.

After the Corporate Average Fuel Efficiency (CAFE for short) law imposed in 1975 after the first oil crisis, Ford worked hard to offer cars with a lower fuel consumption but that can still provide the desired comfort and luxury desired. The 1980 Lincoln Continental was the bridge between the large sedan and the mid-size sedan that followed. And it was one of the cars that helped Ford to become one of the best fuel-efficient corporate brands in the U.S.

The 1980 Continental showed the same grille with vertical slats. The four square headlights were part of an already established image of the brand. From the side, the boxy look of the car was considered imposing for the luxury American brand. A vinyl roof cover was offered as an option to mimic a four-door cabriolet.

Inside, the Continental was a big evolution, with an LED display instead of analog dials. It was a big revolution for the brand. It even featured an on-board computer that showed the average fuel consumption and range. The five seats offered were comfortable and with plenty of room for the rear passengers.

Under the hood, there was a newly developed 5.0-liter V8 engine with fuel injection, which was designed for better fuel-efficiency. The 4-speed automatic gearbox was a standard fit. 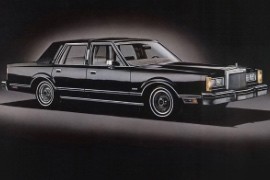