Lightyear introduced its first production vehicle, the 0 (Zero), in 2022 as a 2023 model-year as a stunning mobility solution based on solar power and electricity.

While most automakers tried to create better or more energy-efficient battery packs, Lightyear came up with a different idea: to make a solar-powered EV. The concept wasn't new but previously was used only by specific races held in Australia or other parts of the world. But the automaker admitted that even if it was charged by the sun, its car still needed a battery pack and some motors to move the vehicle.

This incredibly slippery vehicle featured a 0.19 drag resistance coefficient, which was stunning. At the front, it featured a slim grille needed to cool the electronic parts underneath the hood. But, to keep the streamlined vehicle energy efficient, it also sported active shutters in the lower bumper. The 0 also was fitted exclusively with LEDs for headlights, fog lamps, and blinkers. Since the car needed solar panels to charge the batteries, it sported 782 of them on the hood, roof, and rear deck.

Inside, Lightyear used only vegan and naturally-sourced materials such as microfiber suede for seats and rattan palm trims. Since the 0 didn't have any door mirrors but cameras, it featured displays mounted inside the vehicle on the door panels. Atop the center stack, the automaker placed a 10.1" infotainment touchscreen while the driver fronted a second display that showed speed and other essential information from the onboard computer. There were five seats inside the vehicle, with two at the front and a bench profiled for three adults in the back.

Underneath the car's skin, Lightyear installed a 66 kWh battery pack that powered the four motors installed in the wheel. While it wasn't the fastest or the quickest electric vehicle, it offered excellent efficiency. 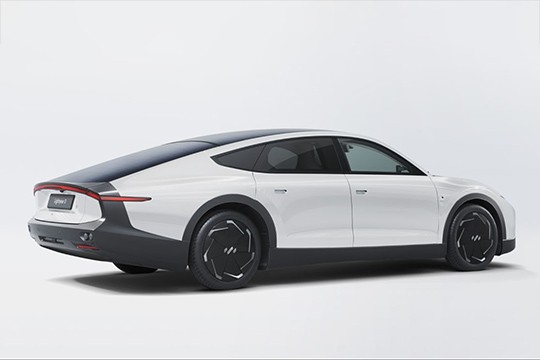